Angus MacBain and the Island of Sleeping Kings 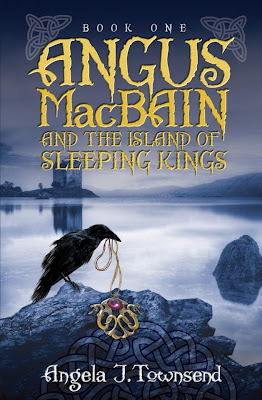 Angus MacBain is unaware that his ancestral roots hail from an ancient sect of Scottish kings. When his dying grandfather gives him a dragon pendant, thirteen-year-old Angus learns of a legacy that will take him across an ocean to the island of Iona and thrust him into a heritage he did not know he had. He soon discovers that his mother, whom he had believed dead, is really a seal fairy, in hiding from a dangerous enemy. To save her, Angus must undergo a perilous journey of destiny and power to battle an evil Dacian knight and those who serve him. With only his family shield and the advice of a wizened vampire hunter to protect him, Angus must navigate dangerous terrain and dark enemies, in a land where the past and the present mingle, and sleeping kings wake.
Get the paperback today!
(A great gift for fans of Harry Potter!) 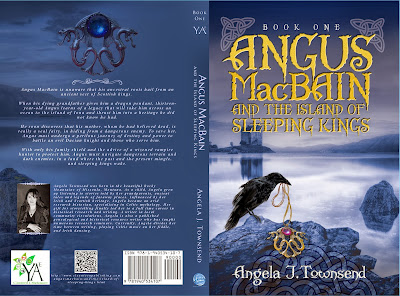 Gloomy shadows crept across the tired oak floor, stealing what little light peered in through a set of stained glass windows.  A dying fire crackled in the corner, its golden embers fading as quickly as the old man who lay near it.
Angus MacBain stood at the foot of his grandfather’s four-poster bed, his hope slipping away with every rattling exhale from the old man’s lungs.  Cocooned in a series of heavy plaid blankets bearing the family tartan, Duncan MacBain struggled to free a withered hand.  He motioned for his grandson to come closer.  Angus took a few stumbling steps, sank to his knees and grasped the thin hand in his.
Duncan raised his head from the pillow.  His eyes seemed to glow in the dimness of the bedroom.  Gnarled fingers pressed something hard and bulky into Angus’ palm, then closed his hand around it and squeezed.  The object cut into the boy’s flesh, but he didn’t try to pull away.
“You’re thirteen now, almost a man.  You’ve got to be brave.  Remember, you’re a MacBain.”  The old man inhaled another ragged breath.  “The arrangements have already been made.  There will be no funeral.  I’m sending you to Scotland—to Iona.  You must leave now.”  His grandfather’s steely eyes pinned Angus to the floor.  “Strange things will happen—things that—just be careful, lad.”
“No, I won’t go.  Not without you.”  He buried his head in his grandfather’s chest. Angus’ throat constricted like a drawstring jerked tight. Tears sprang to his eyes.
“Don’t cry for me, laddie.  I’ll be in the company of kings.”
With that, Duncan MacBain heaved his final breath.
Angus squeezed his eyes shut.  After a weary moment, he opened them to gaze at his grandfather’s motionless body.  With the tension removed from the old Scotsman’s features, he looked relaxed, at peace.  Even so, a bitter rush of sadness swept through Angus and the hole in his heart his grandfather had filled when his parents died, now returned.  Angus’ chest tightened.  Every breath seemed to take more effort than it was worth.
The palm of his hand throbbed.  He unclenched his fist and examined an amulet attached to a heavy chain.  It looked old, perhaps even ancient, with a silver long-tailed dragon clutching a purple thistle in its talons.  Words scribed in a foreign language glistened on its wings.
His father had worn a dragon amulet.  Angus frowned trying to remember what it looked like.  Did it also have a thistle? Could it be the same one?  He’d been so young when his father died, he couldn’t remember.  He slipped it around his neck, the amulet warm against his chest.
“I’ll take care of it,” Angus whispered.  “I promise.”
Angus made his way down the narrow hallway to Grandfather’s study.  An antique clock ticked solemnly on the mantel.  Without grandfather, the room seemed so different. Barren. Unfriendly. Cold.  He fell into a cushy gray recliner that always reminded him of elephant skin and let it swallow him. Maybe if he just closed his eyes for a few moments, he’d wake up and it would have all been some kind of terrible dream. But no matter how he tried he couldn’t keep his eyes shut.
His gaze traveled over the towering bookcases lining the walls, filled with ancient volumes bound by his grandfather’s hands.  Silent rows of books stared back at him, like leather corpses resting in their tombs.  On a nearby workbench, marbled scraps of leather, paste, and a rounding hammer gathered around a dusty press.
Angus’ throat burned.  He’d never be his grandfather’s apprentice again, never help him repair old books about castles, dragons and other tales.
Now he had no one, except Grandfather’s nurse, Vera. Even though she was very nice, he barely knew her.
Angus shuffled down the hallway to his lonely room and packed his things.  He made sure he had his games and the favorite collection of vampire tales his grandfather had bound for him.  He flopped onto his twin bed and glanced at his watch.  Angus’ heart twisted.  Very soon, Nurse Vera would take him to the airport and he’d fly to a strange place he’d only heard stories about.
Angus scanned his bedroom for the last time, memorizing every detail so he’d never forget.  Bare spots on the wall stared back at him, places where his Dracula posters once hung.  In a fit of misery, he’d torn them down and ripped them to shreds.
There was no such thing as vampires and other magical creatures. Life wasn’t about fairy tales, only heartache, despair and death.
Angus narrowed his eyes. If only death were a living thing—he’d destroy it. Make it suffer for ripping away all the people in his life that had loved him. Rage and frustration twisted inside of him.
Angus grabbed an antique sword hanging on his bedroom wall and stabbed it into the center of his mattress. Sparks flew from the bed. Celtic swirls carved into the handle of the sword started to spin. A banging sound hammered into his head like being trapped in a giant bell. He fell to his knees covering his ears. The noise died down and a voice broke into his head.
“Are you all right, Dear?”
Angus uncovered his ears and peered up at Nurse Vera. She never called him by name just, “Dear.” Nurse Vera glanced at her watch. “I’ll help you pack your things then it’s off to the airport with you.” Nurse Vera placed a hand on Angus’ forehead.  “You look so tired and it’s such a long flight. Promise me you’ll try to get some rest on the plane, Dear.”
Angus nodded. He waited for Nurse Vera to see the sword and scold him for messing with something so dangerous, but she just stood there, her eyes filled with concern. Angus glanced at the bed to look at the sword—but the sword was gone.

Angela Townsend was born in the beautiful Rocky Mountains of Missoula, Montana. As a child, Angela grew up listening to stories told by her grandparents, ancient tales and legends of faraway places. Influenced by her Irish and Scottish heritage, Angela became an avid research historian, specializing in Celtic mythology. Her gift for storytelling finally led her to a full time career in historical research and writing. A writer in local community circulations, Angela is also a published genealogical and historical resource writer who has taught numerous research seminars. Currently, Angela divides her time between writing, playing Celtic music on her fiddle, and Irish dancing.
Angela’s first novel, Amarok, was published through Spencer Hill Press in 2012. Her newest novel, Angus MacBain and The Island of Sleeping Kings, was signed for publication with Clean Teen Publishing in 2013.
Angela resides on a ranch, in rural Northwestern Montana, with her two children Levi and Grant.