Any type of fanart (digital/traditional) of YOUR INTERPRETATION of Griffin Valentino in his infamous purple sweater. This can be anything that you want, whether a full body picture, a portrait, photo manipulations, graphic art, or something completely crazy and different. The picture should be as high-res as possible, so it can be featured on CTP’s social media and shown to the world at its very best! Note: if you’re creating a photo manipulated piece, you must use photos that you own the rights to, for legal reasons.

Email your submission to kendralsaunders@yahoo.com with the subject line “Griffin Valentino Art Contest” before December 1st, 2016, along with your name, country of origin, and social media links.

All submissions will be handed over to our two amazing judges, comic artist Dante “Slake” Saunders, and Crimson Tree Publishing (and Griffin fangirl!) representative Melanie Newton. The submissions will be given to the judges without any personal information, to assure there will be no favoritism. The winning piece will be chosen no later than December 15th, and the winner will be notified by email.

A description of Griffin Valentino for those who are unfamiliar with him/the series:

They part, briefly, for a brown-haired man wearing an oversized, fluffy purple sweater and black skinny jeans. And sunglasses. I’ve never seen an outfit like this outside of fashion magazines from the ‘90s and strange Japanese movies, especially not on a man. Even one as strangely handsome as this one.

“Ah, you’re right, she’s better than the other two we considered,” the shaggy-haired one says in a drawling English accent. He smiles at me, but his fuzzy companion just scowls.

“Ask her where David Bowie is.”

“My name is Devon London,” the shaggy-haired one says. Between the ridiculous name and his glowing, golden-kissed skin, he strikes me as a playboy billionaire on holiday. “And this is Griffin Valentino. We’d like to know where David Bowie gets his coffee.”

“Yes, David Bowie. Where does he get his coffee?”

“This is Manhattan, is it not?” Griffin demands, pursing his pouty lips and picking at the fuzzy sleeves of his purple sweater with the precision of a full-tilt diva.

I glance between them, my tone hesitant. “Yes.”

“Then why is it so difficult for us to find out where David Bowie gets his coffee?”

(For reference material for all those who are interested, and for all other aliens alike, grab a copy of Dating an Alien Pop Star on sale for only 99c right here and read more about the book here…)

(Fan art by Dante “Slake” Saunders for the series!) 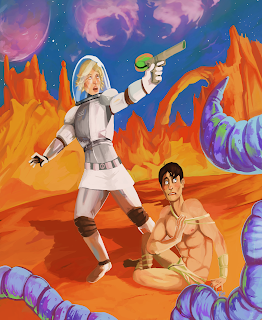 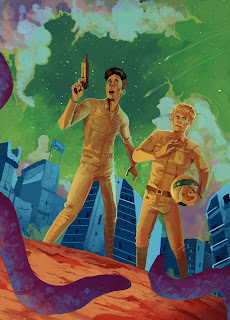