Clean Teen Publishing is pleased to announce that they recently penned a deal with Young Adult author— Audrey Greathouse for her series titled THE NEVERLAND WARS. Our team was excited when this present-day continuation of Peter Pan was submitted to us during the big #Pit2Pub collaboration between authors and publishers on Twitter. The first novel in THE NEVERLAND WARS is slated to release on May 9, 2016.

ABOUT THE NEVERLAND WARS: 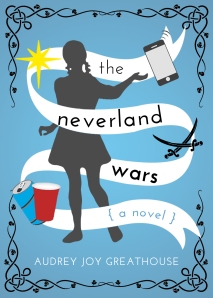 Magic can do a lot: give you flight, show you mermaids, help you eat a star, and…solve the budget crisis? That’s what grownups will do with it, if they ever make it to Neverland to steal its magic and bring their children home. But Gwen doesn’t know this. She’s just a sixteen-year-old girl with a place on the school speech team and a powerful crush on Jay, the soon-to-be homecoming king. She doesn’t know her little sister could actually runaway with Peter Pan, or that she might have to chase after to bring her home safe.

Gwen will find out though—and when she does, she’ll discover she’s in the middle of a looming war between Neverland and reality. She’ll be out of place as a teenager in Neverland, but she won’t be the only one. Peter Pan’s constant treks back to the mainland have slowly aged him into adolescence as well. Soon Gwen will have to decide whether she’s going to join impish, playful Peter in his fight for eternal youth or scramble back to reality in time for homecoming.

s an active member of the Society of Children’s Books Writers and Illustrators (SCBWI) and seven-time winner of the National Novel Writing Month (NaNoWriMo) challenge. Her BA in English Language and Literature comes from Southern New Hampshire University, where she completed her honors thesis on V
ictorian children’s literature.

She wrote the Fantasy Factory column for Writer’s Bloq, has been the columnist for Miracle since 2012, and served as an editor for The Manatee during the 2012-2013 academic year. Audrey’s poems and speculative fiction have been published in magazines around the world including Yesteryear Fiction, Inclement, and Roar and Thunder. In 2013 she sold her first young adult science-fiction novella, Dr. Derosa’s Resurrection, to Mad Scientist Journal for serial publication. She currently writes for Telepathic/TLDR, a silicon valley literary venture which will be released in the autumn of 2015.

Initially from Seattle, she is twenty-two and enjoying the footloose lifestyle her freelance fiction writing affords her. Usually somewhere along the west coast, Audrey is a classically trained pianist and unconventionally trained circus artist, specializing in fire eating and aerial silks. Her long-term goals as an author are to make a modest living writing novels and to build a following that will dress up and participate in her avant-garde art projects. She hopes someday she will be able to tour with other musicians and circus performers, building a traveling cabaret around her stories. Her short-term goals include steadily building her readership and traditionally publishing her YA fantasy series, The Neverland Wars. Check out Audrey’s website here.